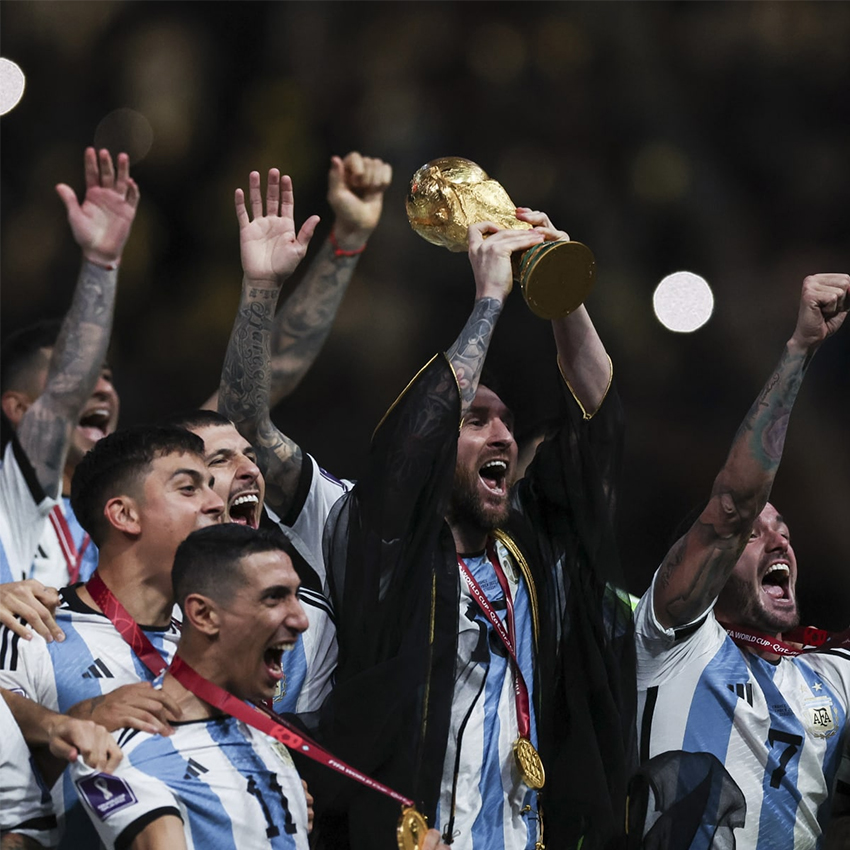 In an amazing men’s football 2022 FIFA World Cup final on Sunday in Qatar, Argentina defeated France 4-2 on penalties after Lionel Messi scored twice in a 3-3 regular-time game that also featured a hat-trick from Kylian Mbappé as the defending champs overcame a 0-2 deficit.

It was a remarkable night of drama at the Lusail Stadium, intense emotion, and shifting fortunes that culminated in one of the greatest tournament finals in history as its two-star players gave commanding performances on the biggest platform of them all.

Messi’s penalty and a spectacular goal by Ángel Di María in the first half appeared to put Argentina in complete control, but Mbappé equalized with a penalty kick in the 80th minute and a volley a minute later to force extra time, just like bookmakers with iOS apps have anticipated, given that odds for the win of either side in regular time were equal, and make 88,966 spectators ecstatic.

Messi gave Argentina the lead once more, but Mbappé equalized with another penalty, becoming the second player, after England’s Geoff Hurst in 1966, to score a hat-trick in a World Cup final.

Argentina Prevails in 6 of 7 WC Shootouts, France Loses 3 of Last 5

As a result, the game was decided by a shootout. Argentina’s Emiliano Martínez stopped Kingsley Coman’s attempt, and Aurélien Tchouaméni missed the target, giving Gonzalo Montiel the opportunity to seal it in the fourth series, which he confidently did.

Argentina has now prevailed in six of its seven World Cup shootouts, including the quarter-final victory over the Netherlands last week when they also blew a 2-0 lead. France, on the other hand, has lost three of its last five shootouts, but which will hurt them more, two of those losses have been in championship games.

It meant that after playing in a record-tying 26 World Cup games, Messi, 35, finally got his hands on the trophy at the fifth and final attempt. This elevated him alongside Diego Maradona, the nation’s first football God, who led them to their stirring second victory in 1986 after their first in 1978.
It seems even more unbelievable given that it happened nearly a month after his team lost to Saudi Arabia in the World Cup opener, which was statistically the biggest upset in tournament history.

Slick Rollercoaster in the Final

Argentina controlled the first hour, outrunning and outfighting a flat French side that was attempting to become the first team to defend the championship since Brazil 60 years ago. There seemed the little indication of the drama to follow.

After 23 minutes, Messi converted a penalty after the recalled Di María outran Ousmane Dembélé and was fouled inside the box.

After 36 minutes, one of the best goals to ever adorn a championship came when Di María slid in the second following instinctive play by Nahuel Molina, Messi, Julián Álvarez, and Alexis MacAllister.

Prior to Nicolás Otamendi tripping Randal Kolo Muani in the 80th minute, France had hardly struck a shot in anger. Mbappé, who had previously gone unnoticed, skillfully converted the ensuing penalty.

After skillfully combining with Marcus Thuram a minute later, he swept in a spectacular equalizing volley that stunned the gathered Argentine fans watching their team give up two quick goals for the third time this tournament.

The tenacious Lautaro Martínez hammered a shot at Hugo Lloris during a counterattack, and Messi pounced on the rebound with a rare right-footed strike, giving Argentina the lead back in extra time. Technology confirmed the ball had crossed the line.

The drama was not over, though, as Mbappé calmly converted another penalty in the 117th minute to complete an incredible hat-trick and score the highest-scoring eighth goal of the tournament.

He and Messi both made the first two penalties in the shootout, but after that, they were forced to watch as their teammates decided their fate.

Lionel Messi made history by becoming the first footballer to ever win the Golden Ball twice at the FIFA World Cup. At Qatar 2022, ‘La Pulga Atomica’ helped Argentina win the trophy for the first time in 32 years by scoring seven goals and dishing out three assists while setting numerous records. At the World Cup 2014 in Brazil, Messi took home the Golden Ball after helping Argentina place second. The Silver Ball in Qatar was awarded to Mbappé, and the Bronze Ball was given to Luka Modrić of Croatia.

A Unique World Cup in Qatar

On and off the field, the highest-scoring World Cup in history (172 goals in 64 matches) raised the bar. Africa made history thanks to Morocco, who became the first-ever semi-finalist from the continent.

It seemed inevitable that this FIFA World Cup would be unique. Qatar 2022 put a new spin on this long-running and adored football festival as the first to be staged in the Middle East, the first to be played in November and December, and the first of its size to be organized in such a constrained geographic area.