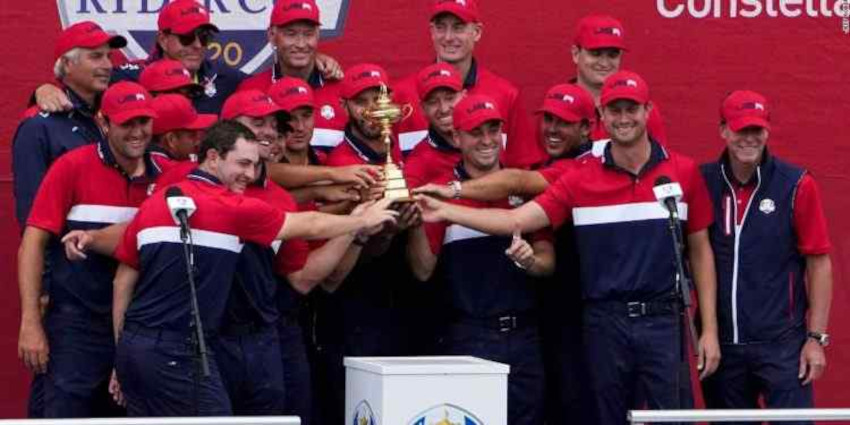 After a historically overwhelming performance over Europe at Whistling Straits in Sheboygan, Wisconsin, Team USA reclaimed the Ryder Cup, a premium biennial men’s golf competition between teams from Europe and the United States which you had plenty of betting markets to wager on (and still have plenty of markets when it comes to ongoing major tournaments) on bookmakers with no deposit bonuses. The hosts were on top from the start, surging into a 9-3 lead after the first three sessions, taking revenge on the rival for being trounced convincingly in 2018 at Le Golf National, France.

Despite the fact that the visiting Europeans hinted at a comeback on Day 2, the US was able to lead 11-5 going into Day 3. Collin Morikawa won the pivotal half point in the Singles matches on the last day, ensuring the US had the requisite 14.5 points to reclaim the Ryder Cup for the United States.

On Day 3, Rory McIlroy gave the Europeans a solid start by defeating Xander Schauffele, the 2020 Tokyo Olympic gold champion, but it was a run of American winners that sealed the triumph for the hosts. It is the first time the United States has won consecutive Ryder Cups at home since 1979-1983.

Morikawa has had a breakout 13 months, winning two majors in the PGA Championship and the Open. But, according to the 24-year-old, being the guy who clinched the winning half-point at the Ryder Cup means “everything” as he told the media after the face-off:

“It means so much, everything, wanting to make that putt, it was a great match against Viktor (Hovland). I don’t think he really missed too many shots. I had to earn my birdies. But to clinch this and bring the Cup back to home soil, it feels so good.”

The US team won the Ryder Cup 19-9 after Daniel Berger defeated Matt Fitzpatrick in the last singles match. It was the largest winning margin in Ryder Cup history. The United States set a new record by nine points. The previous highest winning margin under the modern scoring format, with 28 points available over three days, was nine points, which was achieved once by the US in 1981 and twice by Europe in 2004 and 2006.

Since 1979, no team has won 19 points in a single Ryder Cup match. Because of all this, many golf experts marked this US squad the best team of all time.

It was a dilemma in front of both sides in the match – was it more important to gain experience or to avoid being scarred by previous unpleasant experiences? Steve Stricker and Padraig Harrington, the squad captains, examined these choices. The former chose six rookies for his side, while Harrington went with tried-and-true veterans who have enjoyed success in recent years.

Stricker appeared to be vindicated from the start of the foursomes openers. Three of the four matches were won by the pairings he selected, giving the hosts the perfect start in their quest to recapture the Ryder Cup after losing it three years ago. It only got worse for Harrington and his crew from there.

The US went 3-1 in both Day 1’s afternoon fourballs and Day 2’s morning foursomes, for a total of 9-3 after three sessions. It was the largest lead for either side in the Ryder Cup after three sessions since the US had the lead by seven points in 1975. The Europeans showed some fight on the afternoon of the second day, sharing the four matches 2-2 but knowing that a turnaround would take a massive effort. McIlroy, who had previously struggled, returned to form in the first singles match on a decisive day, impressively defeating Schauffele 3&2 to add something more to his outstanding CV.

McIlroy Couldn’t Handle Things On His Own

However, McIlroy required assistance from his teammates, which he didn’t receive in the face of some great US golf. Patrick Cantlay, who won the FedExCup Playoff earlier this month, was unflappable in his victory over Shane Lowry of Ireland, and Scottie Scheffler dominated world No. 1, Jon Rahm. Unfortunately for the Europeans, the star-studded US squad didn’t let up, with Bryson DeChambeau also winning impressively.

As a result, the 24-year-old Morikawa was left to seal the one-sided triumph. He remained unconcerned while playing another Ryder Cup rookie with lots of talent, Viktor Hovland, losing the last hole to the Norwegian but gaining the requisite 14.5 points to reclaim the title. Dustin Johnson made Ryder Cup history by defeating Paul Casey, becoming only the third player in history to win all five of his matches in a single tournament.

Justin Thomas defeated Tyrrell Hatton easily, then Ian Poulter defeated Tony Finau to give European fans something to rejoice about. It was an emotional moment for the seasoned Poulter, who remained unblemished in Ryder Cup singles with the victory, as he instantly fell to his knees afterward.

Before Lee Westwood scored a rare European point, Brooks Koepka added another US point. And before Berger earned the record-breaking point, the highest Ryder Cup margin of victory since 1979, Jordan Spieth and Tommy Fleetwood halved their high-quality match.

As we stepped into 2022, let’s take a look back at some of the wisest and wildest bets, and most importantly – the largest outright wagering wins from last year. We’ve selected the Top 5 winnings ...