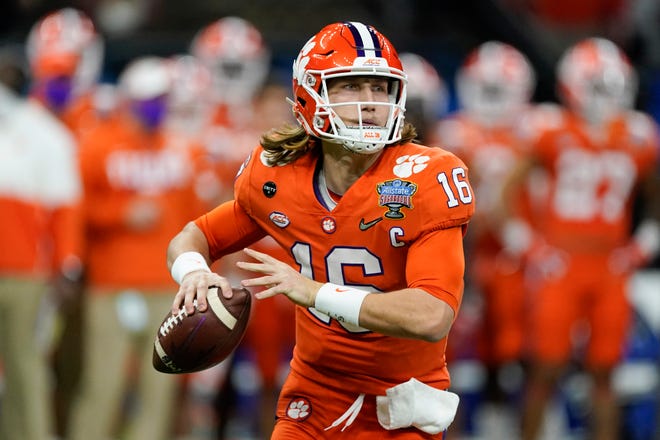 As expected, the Jacksonville Jaguars have chosen Clemson quarterback, Trevor Lawrence, as the first pick in the NFL draft in Cleveland.

The team from the state of Florida got the right to choose first ‘thanks’ to the worst win-loss record last season, as they achieved only one triumph in 16 games. And even before it was known which side would be entitled to the first pick, it was clear that exactly Lawrence would be ranked as no.1.

The 21-year-old quarterback, born in Knoxville, Tennessee, has been dominant in the Clemson Tigers jersey since his inaugural season in college and is considered one of the greatest football talents to emerge in recent years.

Last season, Lawrence had completed 231 successful passes of 334 attempts for 3,153 yards and 24 touchdowns, with five intercepted passes. The Tigers ended the season at Sugar Bowl, losing 49-28 to the Ohio State Buckeyes. The latter then lost convincingly to Alabama Crimson Tide in the title fight by a 52-24.

As the second pick, the New York Jets chose Zach Wilson, the former quarterback of BYU Cougars, which was also an expected choice. Wilson completed 247 passes of 336 attempts for 3,692 yards and 33 touchdowns in his last season in college, with just three interceptions.

The real draft suspension actually started from the third pick, as the first two were, as we stressed, expected. The Miami Dolphins initially had the right to choose the third pick, but they gave it away to the San Francisco 49ers in the trade, and they decided to take Trey Lance, another quarterback, who played for North Dakota State.

The biggest mystery was about who the Atlanta Falcons would choose from the fourth position, and the choice fell on Kyle Pitts, the tight end of the University of Florida. The Cincinnati Bengals were fifth in line to choose and they opted for the wide receiver Ja’Marr Chase, who is well acquainted by Joe Burrow, who was chosen last year as the first pick since they played together at Ohio State LSU.

An excellent choice from the seventh position was made by the Detroit Lions, who opted for the tackle Penei Sewell after Jaylen Waddle, the new wide receiver of the Miami Dolphins, was previously called to be the sixth pick. This year’s winner of the Heisman Trophy, DeVonta Smith, ended up in the Philadelphia Eagles, who entered the trade with the Dallas Cowboys and thus won the 10th pick.

Bears Probably Won Most In This Year’s Draft

The Chicago Bears are considered to be one of the biggest winners of the 2021 NFL Draft. They chose quarterback Justin Fields from 11th place. The former Ohio State student is believed to be the main star of the team from the state of Illinois in the coming years.

The choice of offensive tackle Rashawn Slater as the 13th pick by the Los Angeles Chargers was also interesting. The New England Patriots took Mac Jones, a quarterback from Alabama, from 15th place. It will be interesting to see his collaboration with legendary coach Bill Belichick.

In addition to the first pick, which we wrote about at the beginning of the news, the Jaguars had also the right to choose the 25th pick. The decision was to take another player from Clemson – running back Travis Etienne. Lawrence and Etienne are expected to become a tandem that will bring Jacksonville the championship titles in the near future.

The draft in Cleveland had seven rounds and lasted for three days. We cannot wait – and we are sure the same is with you, too – for the odds of the world’s top bookmakers for the next NFL season.