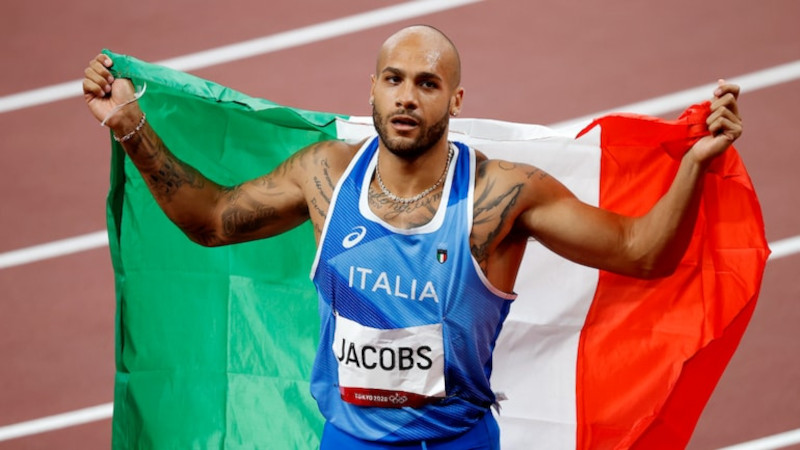 Italian Lamont Marcell Jacobs, 26, is the new sensational Olympic winner in the 100-meter dash at the 2020 Tokyo Games. He ran 9.80 seconds, setting a new European record, four-hundredths of a time better than the one he ran just two hours earlier in the semifinals, which was also a European record. This way Lamont beat the odds set by bookmakers with no deposit bonuses for the event in the Japanese capital. Earlier this year, he became the European indoor champion in the 60 meters while only two years ago, he was eliminated in the semifinals at the World Championships in Doha.

Silver in the 100m dash in Tokyo, with a new personal record of 9.84 was won by American Fred Kerley, until recently a competitor in 440m, while Canadian Andre De Grasse, who took bronze five years ago in Rio, reached bronze with 9.89 here as well. Chinese Su Bingtian, who ran a new Asian record in the semifinals with 9.83, was sixth in the final with 9.98. American Trayvon Bromell, who arrived in Tokyo with the best result in the world this year (9.77), did not even qualify for the finals.

Lamont Marcell Jacobs Jr. is the first Italian to win the gold medal in the 100 meters at an Olympics after being the first from his country to enter a final. He was born in El Paso, Texas, United States, on September 26, 1994. His father Lamont Marcell Jacobs Sr. was a soldier who met Lamont’s mother Viviana when he was at the Vicenza base for U.S troops, Camp Ederle. It was short-lived marriage: the woman, after separating from her husband, returned from Texas, where they went to live, to Italy – in Desenzano sul Garda – when Lamont was still a child.

As a boy, he first practiced basketball, following in his father’s footsteps, and football. Then, at the age of 10, he got tempted by the sprint and began running at the Desenzano del Garda track with the coach Gianni Lombardi, the organizer of the famous Multistars meeting.

He Was Strong in Long Jump, But…

Being under the watchful eye of the Italian track and field legend Pietro Mennea, Lamont’s speed skills were put to good use. Starting from 2011, he tried the long jump, and in 2013, before suffering from a foot injury, he improved an indoor junior record (7.75) that was alive since 1976. Lamont then exceeded eight meters (8.03) in qualifying for the 2015 Italian Athletics Championships in Padua.

In September of that year, he went under the guidance of the former indoor triple jump world champion Paolo Camossi, going to train in Gorizia.
First Signs of Great Growth Appear in 2019

In 2016, at the Tricolore Junior e Promesse (the Italian Championship for promising athletes) in Brixen, Lamont made the longest-ever long jump in Italy (8.48), but with wind assistance (+2.8), and therefore it was not validated, while in 2017, he claimed third place in the national all-time indoor lists with 8.07. After a knee problem, he returned in 2018 as a sprinter with a time of 10”08 and, from the autumn of the same year, he moved to Rome.

Lamont has three children: Anthony and Megan, from the current relationship with the woman named Nicole, and Jeremy, from a previous relationship.