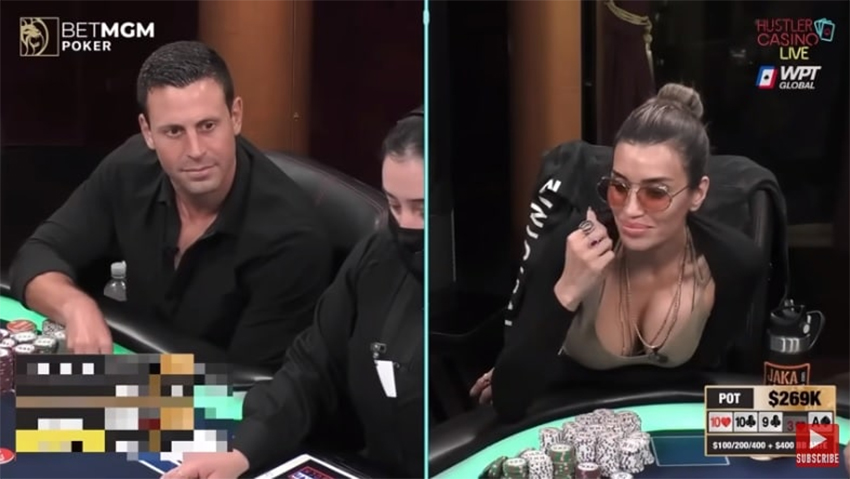 Garrett Adelstein, a professional poker player from Arizona, claimed that during one of the biggest, most renowned cash games in the world, he was “clearly cheated”.

Adelstein frequently plays no-limit Texas hold’em (for which BetConstruct designed a special single-deck four-round variant for live betting at online sportsbooks with no deposit bonuses that have a casino section) at the upscale Hustler Casino, which is open around the clock in Gardena, California. Hustler Casino Live (HCL) is a live broadcast that features some of the finest poker players in the nation.

In a hand shown on the webcast, Robbi Jade Lew, a brand-new pro player from L.A., called Adelstein’s semi-bluff shove with jack-high and a combo draw for a pot worth $269,000, leaving Adelstein speechless. When Adelstein and Lew played a hand heads-up, the wrangling started.

With the jack of clubs and four of hearts against the more seasoned pro’s eight of clubs and seven of clubs, Lew called Adelstein’s pre-flop $3,000 raise from the $800 straddle. Due to the open-ended straight flush draw, Adelstein seemed confident in the potential of his hand and placed a second wager of $2,500.

Adelstein’s hand hadn’t yet been formed, although he’d have a significant edge if he had a club, especially a six or a jack (which Lew had). He could also make a straight with a six or a jack of any suit. Adelstein’s bet was called by Lew with a jack high. In turn, Lew increased Adelstein’s $10,000 wager to $20,000 in order to increase the pressure.

Adelstein was considering his next move when he decided to go all in with a semi-bluff, which meant that even though his hand wasn’t yet complete, there were still enough strong cards in the deck for him to finish it. Lew had to wager the remaining $109,000 of her total stack in order to advance to the showdown.

Bart Hanson, the HCL commentator, didn’t anticipate Lew to make a call. In the end, she’d have been left hoping for a pair on the river as she still only had jack high and had no draw. Lew, though, “wanted to see it”, which meant that she was considering buying Adelstein’s silence in order to see what his hand was, and she seemed to convince herself to make the peculiar, outrageous, and unusual call.

The ace of spades came after the second run of the river, which started with a nine of diamonds. The players agreed to run the river (the last card) twice, but Adelstein ended up with eight highs because both runs failed. Meanwhile, Adelstein was the only one at the table who didn’t believe Lew when she turned over her cards and revealed jack high.

The reason for the skepticism is that Lew should’ve folded rather than wagering her whole stack of chips, according to contemporary poker theories, regardless of Adelstein’s hand. This is due to the fact that, according to DraftKings’ calculations, Lew would’ve lost to many of his bluffs in addition to losing to all made hands including complete houses, over pairs, and other pairs. According to the same gambling operator, she had only six chances to win and almost 150 ways to lose her hand. But she did succeed.

Both On- And Off-Camera, There Was a Contentious Disagreement

As the cameras kept rolling, Adelstein remarked, “I don’t understand what’s happening right now.” He enquired as to why she had called. Lew remarked, “I thought you had ace high”. “So, why call with jack high?” Adelstein asked, as according to him, ace high would have prevailed against jack high. Lew responded, “Because you don’t have sh**.” Then Adelstein got up from the table.

Lew eventually went as well to meet with Adelstein and a producer from HCL. Adelstein then came back to the table to gather his chips and exit the game altogether as RIP, another player, got up to join Lew. RIP was heard cursing at Adelstein. The chips Adelstein had lost to Lew ended up in his possession, but it’s unclear if Lew voluntarily offered to return them or if there was another motive.

Poker player Eric Persson, who was playing in the HCL game and had seen the hand, commented to the other players at the table: “She never should’ve given the money back. It makes you look guilty.”

Lie-detector tests may be used as part of an impartial inquiry into a claim of cheating in one of the most well-known high-stakes poker tournaments in the nation, according to Hustler Casino Live (HCL), a well-liked live stream that takes place every day from Monday through Friday.

Yes, Lew gave Adelstein his chips back during a conversation with him and HCL producer Ryan Feldman off-camera. However, it’s unclear, though, whether Lew provided Adelstein them voluntarily or if he requested them because of conflicting assertions.

HCL stated in a statement on Thursday that it’ll look into the matter despite having “no proof either way or any indication of any wrongdoing besides the accusations of parties involved.” HCL said in a follow-up statement on Saturday that using a polygraph as part of that probe was a possibility.

Despite having faith in its own security, technology, and staff members’ integrity, it said that it’s in the midst of retaining specialists for its probe. HCL stated that although the inquiry may take some time, it would eventually share the findings publicly.

HCL had previously stated that neither Adelstein nor Lew would be let back onto the streamed games until the investigation was finished.