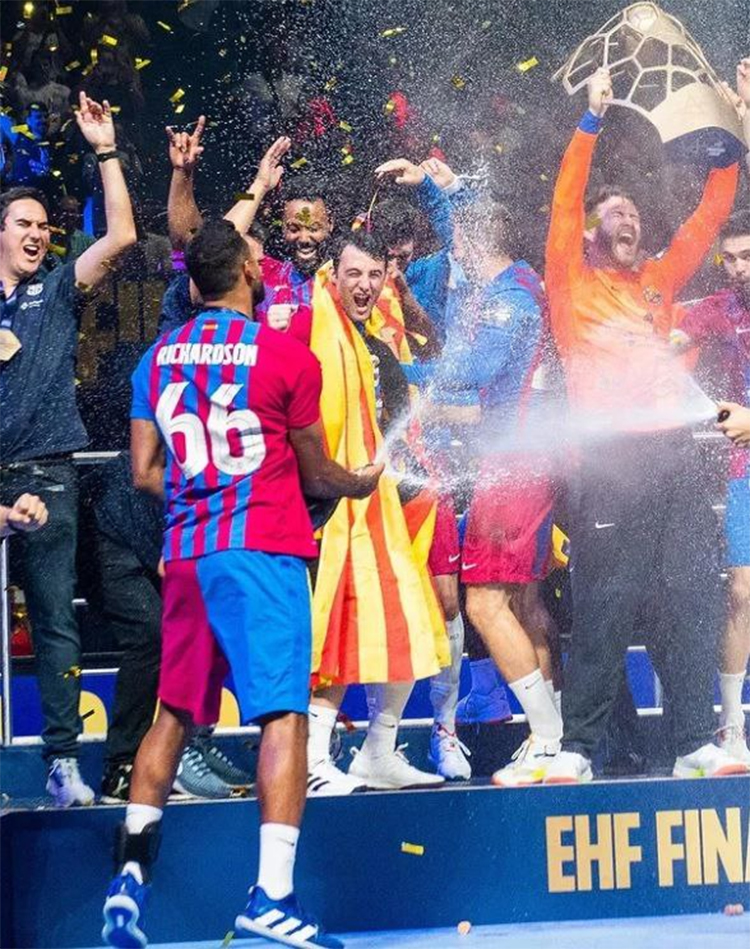 Álex Dujshebaev against Gonzalo Pérez de Vargas. Two Spaniards for a Champions League laurels. Glory went to the latter, the goalkeeper, and eternity went to Barcelona, who lifted their 11th trophy in the most elite European club competition after surviving a scary afternoon in Cologne, Germany.

The penalty shootout resolved the Final Four and a single mistake, that of the son of one of the best handball players of all time Talant Dujshebaev, who previously had put the ’Blues’ on a verge of a defeat, forcing their fans to eat a box of nails during to the slow and tiresome rhythm set by his team, tilted the duel at the Lanxess Arena in front of nearly 20,000 spectators.

Dujshebaev Tragedian, Not Only in Penalty Shootouts but Also During Overtime

After 28-28 in the regular time, Álex Dujshebaev had already had it on the last pitch of extra time, but his shot went wide. Before, Poland’s Łomża Vive Kielce had hunted overtime with a goal from Belarusian Artsem Karalek (MVP of the F4). Overtime ended 4-4. There was no room for more drama in the arena until the final turned to the epic and tragedy of a penalty shootout that was inevitable to decide a harrowing clash.

At that moment of a thriller, the two goalkeepers, Pérez de Vargas and German Andreas Wolff, two first-class players in their roles in world handball, were tied for everything: 12 saves and 27% success each. In a penalty shootout, two shots hit Wolff, but they ended up inside. Only one hit Barcelona’s goalkeeper, in the right leg, and it was worth a win in the Champions League. The precision of the Frenchman Ludovic Fabregas in the fifth turn closed the intrigue and Barcelona exploded with joy, winning penalties with a score of 5-3.

Barça had the pressure of repeating last year’s success. It seemed they won’t be able to cope with it. They fastened in a big way during the season, raising concerns about the quality of the team coached by Antonio Carlos Ortega after being defeated in several games in the early stages of the competition. However, Barcelona found enough reliability to return to the Final Four, and in the gorge of two games in just 24 hours, they emerged triumphant. Barcelona’s potential to win the CL trophy was noticed by the best mobile bookmakers who put significantly lower odds on their triumph compared to Kielce.

Actually, the Catalan giant entered the men’s handball history – no one had won back-to-back titles in the Champions League since the tournament was put under the final four format. The kings of Europe indeed.