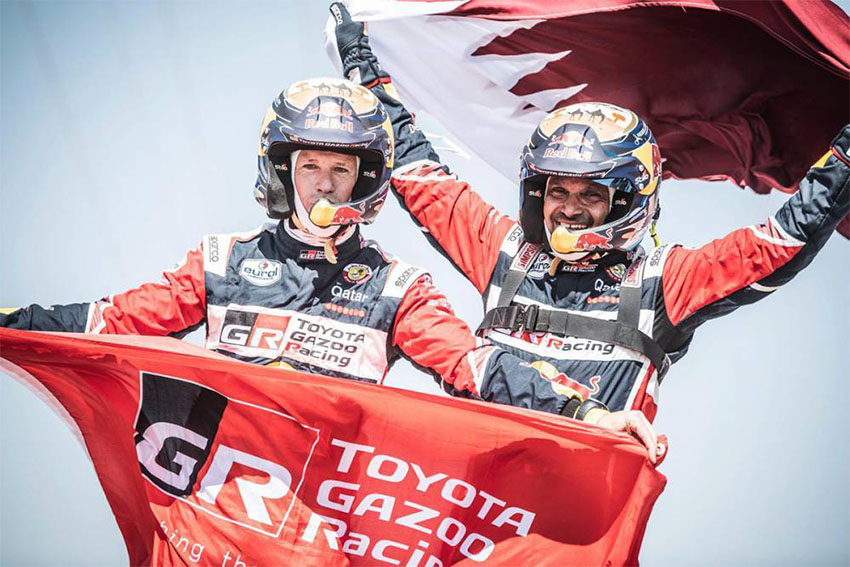 Sam Sunderland won his second title in the motorcycle race, following his first in 2017, and led GasGas to the top of the podium, while Nasser Al-Attiyah added a fourth ‘Bedouin’ trophy to his collection, joining those won in South America (where the events from 2009 to 2019 were held) in 2011, 2015, and 2019.

Francisco López, a Chilean driver for South Racing, won the lightweight prototype category, while Seth Quintero, a 19-year-old whirlwind, swept the rally, earning 12 specials in his OT3-Red Bull. Despite a last-minute scare, Austin Jones lived up to expectations in the SSV competition. The Kamaz truckers, on the other hand, had an easy time, starting with Dmitry Sotnikov, who defended his title after topping the general standings from A to Z.

The FIA and FIM World Rally-Raid Championships awarded the first points for the 2022 season in the Saudi deserts and on their tracks. The next event is the Abu Dhabi Desert Challenge, which will take place from March 5 to 10.

All winners crowned at 2022 Dakar:

Being the clear favorite is a coveted position, but it isn’t always easy. Nasser Al-Attiyah has previously broken under duress, but he and his co-driver Mathieu Baumel put up a brilliant performance this year. The Qatari was keen to take the lead right away, and he won both specials (1A and 1B) in the first stage. Meanwhile, the Audis were already on the back foot, first with Carlos Sainz’s disastrous navigational error and then, the next day, with Stéphane Peterhansel losing one of his rear wheels and having to take a hefty penalty in order to continue his Dakar journey.

With this backdrop, the race for first place quickly narrowed to a battle between Sébastien Loeb and Al-Attiyah, but the Frenchman stumbled in stage 3, suffering a fractured drive shaft and a 50-minute disadvantage by the time the rest day arrived. With a firm grip on the race, the man who gained the nickname ‘Prince of the Desert’ in South America became a monarch by winning his fourth Dakar title in the Middle East, just next door to his native country, to go with victories in 2011, 2015, and 2019.

Loeb can take comfort in his BRX Hunter’s outstanding performance, but, like in 2017, when he came up short in his duel with Peterhansel, he was forced to settle for second place… Yazeed Al-Rajhi from Overdrive made many appearances in the Franco-Qatari struggle, demonstrating that he’s a force to be reckoned with on home soil by securing his best result to date and advancing to third place on the final podium for the first time at 1 h 01′13′′.

Prodrive can be thrilled to have Orlando Terranova’s Hunter in fourth place, his best finish in a car after 14 starts, below the Top-3 that everyone wishes for. The Mini X-raid buggy, on the other hand, appears to have been left in the dust by the new T1+ cars, with Jakub Przygoński falling two positions to sixth. Giniel De Villiers finished fifth, his eighth Top-10 result. In his Century, Mathieu Serradori was also in the Top-10 (the 9th). Audi’s strong performance over the last fortnight was highlighted with Mattias Ekström’s 10th position overall.

It would be an understatement to say that the motorbike category was the closest-run race of the 44th Dakar. In Jeddah, the 3′27′′ gap between Sam Sunderland and Pablo Quintanilla (the biggest favorite to win the title according to the best mobile bookmakers) was the smallest in the leader board since 1994, when Edi Orioli finished 1′13′′ ahead of Jordi Arcarons. After a losing streak that dated back to 2017, the Englishman was able to resume his winning ways. Sunderland’s star had appeared to be fading. He had to settle for third place the next year after refusing to withdraw from the race.

To break the loop, the 32-year-old Dubai-based rider first hid behind his flamboyant teammate, Daniel Sanders. However, ‘Chucky’, the main man of the first week, was sent home in the early hours of the morning after a dumb collision while entering the bivouac in Riyadh. Sunderland had already won the overall championship, which he had retained for four days without winning any specials. Meanwhile, three additional past champions set out on an impossible journey after stumbling in the first round: it was 2021 all over again for Toby Price and Ricky Brabec, who were joined this time by the defending champion, Kevin Benavides. Only Matthias Walkner and Adrien Van Beveren, both past winners, were able to match Sunderland blow for blow.

With a win in stage 8, the official GasGas rider delivered the clincher. He used the same old tactic to approach the following stages with caution and devise a strategy for stage 10. Sunderland and Walkner held back so that in the following special, they could chase down the new leader, Van Beveren, who was dressed in Yamaha blue. Quintanilla took advantage of the opportunity to repeat his second-place finish from 2020.

Sherco and Hero, two young bike brands, also had their time in the spotlight. Lorenzo Santolino and his Sherco were ensconced in the top 5 for the whole first week, and they expected to be involved in the battle for glory before the tables reversed. In stage 3, Hero and Joaquim Rodrigues won for the first time, with a particular mention of Paulo Gonçalves. Honda’s crimson fluttered in the breeze of the appropriately called sea once more, but this time it wasn’t his. GasGas avenged KTM’s betrayal by becoming the sixth constructor to win the Dakar.